Apart from an allusion in Arthur’s post in March, we haven’t mentioned Ukraine. I was driving through a small Welsh town this week, where a statue of Owain Glyndŵr on horseback stands imposingly in the square. He was careering into battle bearing the Ukrainian flag. It’s a gesture; adorning a statue with a flag does not achieve much in itself, but it carries enormous symbolism, particularly on that statue. Owain Glyndŵr was a medieval leader of Wales, a talismanic figure, fighting for independence from England. A clear link, of heroism and independence, is being forged by that fluttering flag. 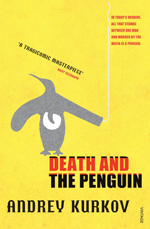 Reading literature in itself will not achieve very much either, but it will promote empathy and understanding. With that in mind, it would be good to read Andrey Kurkov’s Death and the Penguin. Kurkov is a Russian who lives in Ukraine, and while this novel does not have a direct bearing on the current traumatic events, as it was published in its English translation in 2001, its satire gives a picture of the corruption and dangers in post-Soviet Russia and Ukraine at that time. On the one hand, it is chilling, but the narrative is told with charming, gentle, absurd humour as Misha the penguin attends funerals in Kyiv. Read about Death and the Penguin here and on the BBC site you can hear Kurkov talking about the novel.

Kurkov lives in Kyiv and insists he will never visit Russia again, but he is determined to keep writing and maintain his sense of humour despite the destruction around him. Read an interview with Andrey Kurkov here.

In the article he recommends some non-fiction reading in order to gain a real grasp of Ukraine’s history. It is also instructive to read about the development of post-Soviet Russia, Putin’s control and the west’s relationships with the country, eager to trade with Russia and its oligarchs. For a guide to such reading, have a look at these recommendations.

And again from the BBC, you could listen to Kurkov talking about Vladimir Putin’s attack on Ukraine’s identity.