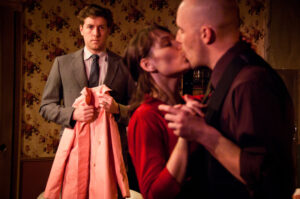 The Homecoming by Harold Pinter is a remarkable play. It is staged quite frequently, and I have seen it in London and Auckland, both productions creating fascination and unease matched with great comedy. It teeters on that ambiguity all the way through; I remember the shocked face of a staff member of a London hotel who came into a room where a friend and I were doing a dramatic reading of one of its scenes, clearly wondering why we found such material so funny. It’s a play which fractures family dynamics, where a glass of water becomes erotic and the power in sexual relationships – including commercial ones – is consistently challenged. The swagger of machismo, with its latent violence, is played and subverted by an ice-cool woman. Like Mamet’s Oleanna, discussed back in July, it is an interesting choice of drama to revive in the light of #MeToo, which has also challenged a male-centric view of the world, particularly in terms of sexual relationships. Read this article about the latest production.

Pinter was awarded the Nobel Prize for Literature in 2005, a clear indication of the esteem with which he is held. He started his career in the theatre as an actor, training at and the Central School of Speech and Drama before performing in repertory theatres while cutting his teeth as a writer. Even when well established as a dramatist, he sometimes still acted, and notably gave some fine performances of roles in his own plays, notably Mick in The Caretaker, Goldberg in The Birthday Party, and the swaggering Lenny in The Homecoming. He was very effective in roles which demonstrate subdued, simmering threat, though this was less apparent in his performance as Sir Thomas Bertram in the film of Jane Austen’s Mansfield Park, as you may imagine. As a writer for the theatre, therefore, he had a mass of practical experience of the stage, of performance and of directing an audience’s responses. 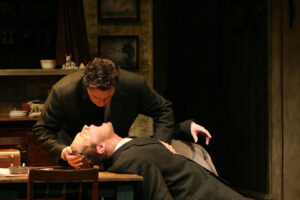 When asked what his plays were about, Pinter once famously answered ‘The weasel under the cocktail cabinet.’ The gnomic answer is suggestive of a lurking ferocity, a hidden animalism, beneath the veneer of polite society. A phrase which has been used about his plays is ‘the comedy of menace’, which is particularly appropriate to a play such as The Homecoming. Frequently in Pinter’s plays, the audience does not know quite what is going on and that lingering uncertainty tugs away – what is the relationship between Goldberg, McCann and Stanley in The Birthday Party? It’s a play with a jaunty, optimistic title and does indeed contain a birthday celebration, complete with the present of a drum, but it is no birthday party that any one of us would like to attend.

It is fascinating to see how Pinter creates menace through often quite ordinary dialogue. It is also often what is unsaid rather than what is said, and he is famous for indicating different lengths of pauses in and between speeches – the famous ‘Pinter pause’ which leaves ideas hanging suspensefully.

Some of his later work is darkly political, though never explicitly, as an extension of his fascination with power, the powerful and the powerless. It can be a surprise, therefore, to come across some of his short comic sketches, which use the familiar Pinteresque techniques for untroubled humour. Take a look at Last to Go, for example, an aimless discussion about newspapers which becomes endearingly funny, or Trouble in the Works, which plays on ludicrous imaginary engineering terms in a trade union dispute.

Pinter is one of the most important late twentieth and early twenty-first century playwrights and well worth exploring.