As the last few weeks in global politics have seen the belligerent invasion of Ukraine by Putin’s Russia, there seems to be no better time to read (arguably) one of the 20th century’s greatest pieces of satire: Mikhail Bulgakov’s The Master and Margarita.

The novel intricately weaves together two narratives, one set in 1st century Jerusalem and the other in 1930s Moscow. These detail the Master’s account of Yeshua Ha–Nozri’s (Jesus of Nazareth) trial and execution as well as the hijinks of Satan, posing as a black magician, and his crew of misfits in Stalinist Russia. The sagacious blend of these two worlds allows further criticism of the Soviet regime as both see the innocent punished and imprisoned and the state play an uncomfortably large role in the lives of its citizens.

The power of censorship and the NKVD (Soviet secret police) meant that many Rusian authors like Bulgakov had to choose between publishing their work surreptitiously, dismissing a career in literature, or becoming a mouthpiece for state propaganda, like the MASSOLIT members in Bulgakov’s fictionalised Moscow. Bulgakov’s decision not to publish The Master and Margarita in his lifetime (the novel was released posthumously in 1967) was wholly unsurprising. Therefore, his novel serves, in part, as a love letter to literature and its pivotal role in society. State sponsored poets are sufficiently ridiculed and those with talent ‘disappear’ or are declared insane. Many of you will be familiar with the Soviet era ‘unperson’ (the term coined by George Orwell in 1984) who was airbrushed out of history due to their unsanctioned beliefs. The same techniques are displayed in Bulgakov’s novel, which humorously explores the ‘mysterious’ vanishing of Muscovites in the night. We see the same control now, as the Russian media claim the forthright success of the Russian army’s ‘liberation’ of Ukraine. Putin’s claim that that Ukraine ‘is not just a neighbouring country for us. It is an inalienable part of our own history, culture and spiritual space’ is further proof of that same Soviet capacity to rewrite history to complement a contemporary narrative. 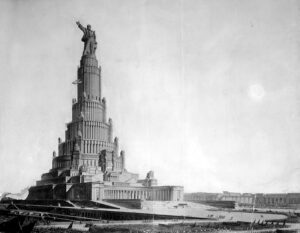 Furthermore, the USSR’s inclination toward vanity projects, seen through the reconstruction of Moscow in the 1930s and the planned but unbuilt Palace of the Soviets (left), is artfully exhibited by Bulgakov’s characterisation of Satan and his impact on the lives of Muscovites. Satan’s magic show sees him make a ‘rain of money’ for the audience who are suffering under the oppressive thumb of Stalinism. This striking show of decadence is deeply symbolic and represents the USSR’s use of smoke and mirrors to distract their citizens from the hardship in their lives. Prominent Putin critic Alexei Navalny, who was poisoned in 2020 and is now in Russian prison, believes that current invasion is akin to those erstwhile ‘Great Construction Projects of Communism’. Both had similar motives: to focus the attention of Russians toward their nation’s prosperity and away from its fundamental failures. However, ultimately, like Satan’s money that is eventually found to be worthless, these vanity projects were often underwhelming – if they were even built at all. Bulgakov’s satire subtly pokes fun at the Soviet state’s penchant for ostentatious projects, as well as the stifling bureaucracy of the communist system, demonstrating the elemental ineptitude of totalitarian rule.

For more criticism of Communism, totalitarianism and the Soviet system in literature, Orwell’s 1984 and Animal Farm are a must. Additionally, for satire of the USSR, Armando Iannucci’s black comedy The Death of Stalin aptly displays the hypocrisy and absurdity of Soviet rule that Bulgakov so powerfully captures. More convincingly, it is also on Netflix so definitely worth watching.