A Crime Against Fiction? 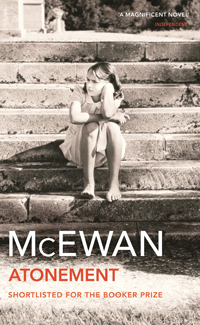 As Brian Finney has noted, responses to McEwan’s novel Atonement were divided upon publication, between those who warmly praised the novel as a masterpiece, and those who felt that the revelation in its closing pages is a trick on the reader, ‘an instance of postmodern gimmickry.’[1] The admission that the entire novel has been its protagonist’s attempt to create her own atonement for wrongs committed in her past does indeed demonstrate a self-conscious awareness of fictionality which is a feature of postmodernism. Is it, however, a gimmick?

On one level, the words ‘story’ and ‘fiction’ carry definitions of invention and untruth, so it is perhaps inconsistent to be offended by a trick of storytelling, a twist of narrative. Atonement is a self-consciously literary novel; as well as telling a story, it explores the ways in which stories are told. McEwan opens with an epigraph from Jane Austen’s Northanger Abbey and in the last section the Tallis’ house has become the hotel Tilney’s, another reference to that novel. Those links to Austen frame Atonement and are instructive in interpreting McEwan’s own structure. 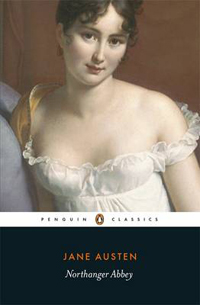 The lines from Northanger Abbey are Henry Tilney’s. By using them at the opening of the novel, McEwan draws a parallel between the naïve assumptions of Catherine Morland and the ‘dreadful nature of the suspicions’ which Briony uses to condemn Robbie in Part One of Atonement. It therefore serves as a warning to the reader that such an error of judgement will be made in the narrative, but it also serves as an indication of narrative style. Although set in the early 20th century, the country house setting, the gardens, the gathering of young people for formal dinner, the entertainments by children, the suggestions of romance are all the traditional motifs of the realist social fiction of the 19th century and are particularly reminiscent of Austen. At the time of Atonement’s publication in 2001, the style is consciously old-fashioned.

It is not until Part Three that the reader learns that Part One is Briony’s reworked version of her manuscript rejected by the publisher, but even in the redraft we can still see the signs of the immature writer. McEwan is quite a sparse writer; it isn’t his style his style to write ponderous, descriptive prose. Take for example this early passage from Chapter Two:

‘…a display of wintry sedge, by the unplayed, untuned harpsichord and the unused rosewood music stands, by the heavy velvet curtains, loosely restrained by an orange and blue tasselled rope, framing a partial view of a cloudless sky and the yellow and grey mottled terrace where camomile and feverfew grew…’

In those 50 words, there are 17 adjectives and adverbs (34%), weighing down the narrative with unnecessarily detailed description. The tricolon of ‘unplayed, untuned’ and ‘unused’ also suggests the musical equipment is for display only, like the ‘wintry sedge’. One of the key features of the garden at the Tallis’ house is a folly of a temple – another artificial construction for the purposes of display. Fittingly, Lola’s rape occurs adjacent to this folly – Briony’s judgement is based on what she sees, rather than reality. The novel also begins with The Trials of Arabella, Briony’s melodramatic play. While Part One models itself on the classic Austen-like English novel in setting and characters, McEwan has also laced it with clues which indicate that it is an artifice beyond being a narrative.

While there are clues to Briony’s authorship in Part One, a key feature which separates it from Austen is the use of different narrative perspectives – ‘the perceptions of each of the three figures’ of Briony, Cecilia and Robbie. While the narrative voice remains third person, McEwan uses focalisation to move the narrative consciousness between the characters, and there is a chapter from Emily Tallis’ perspective. This is a more Modernist method than the Jane Austen framing and Briony’s editor thinks he sees an imitation of ‘the techniques of Mrs Woolf’. He alludes to Virginia Woolf, a pioneering modernist writer who is often credited with stream of consciousness narration. Briony’s story uses the different perspectives to look at key events in different ways and show how misunderstandings occur, giving the reader an advantage over any one of the characters. The central events treated in this way are Robbie’s and Cecilia’s scene at the fountain and their later lovemaking in the library, both observed and misinterpreted by Briony. While the novel seems to start, therefore, as an homage to Jane Austen, it moves forward in literary style and consciously shows the influences of Woolf and Elizabeth Bowen – as it should, since Cyril Connolly passes on some of the latter novelist’s advice to Briony. For all its apparent realism, therefore, Part One can also be seen as a kind of literary pastiche, advertising its status as a constructed text. Revealingly, Briony thinks to herself, after finding Lola:

‘It was her story, the one that was writing itself around her.’

Part Two reads like a different novel entirely. In many ways it is; while Part One is revised and reconstructed juvenilia based on events and the observations of its author, Part Two is Briony’s invention. As a war narrative of the humiliating British retreat to Dunkirk, it is a powerful piece of writing, focusing a seismic piece of history on personal experience. While the first part of the novel illustrates the sham and decay of country house life, this wartime section shows a more dramatic, brutal collapse of civilisation. The moments of goodness are small and personal: the French farmers’ welcome of Robbie and his fellow soldiers with bread, cheese and wine; Mace’s rescue of the beleaguered RAF man. The military operation is confused and led by incompetents like the major with the ‘little toothbrush moustache’, while the soldiers face explosions and ‘the rippling thuds of machine-gun fire’ from airborne attacks.

There is a chilling realism to this section of the novel, which focalises Robbie’s perspective with only Cecilia’s letters giving an alternative point of view. With its clear historical references it is convincing as a World War II narrative, but for both McEwan and Briony, it is a reconstruction from research. It was the social and economic disasters of the Second World War that brought some of England’s decaying social structures to an end. Part One showed the gradual decline of the English country house, but such a household could not survive the war. The horrors of that war also brought to an end cherished ideas of civilisation. The resulting sense of dislocation produced Postmodernism, so the Modernist direct style of Part Two continues McEwan’s progression of narrative styles, from the social observations of the early 19th century in Part One to the Postmodern surprises of Part Three.

The idea of narrative as artifice becomes explicit in the third part of the novel, as Briony the writer comes in to more certain focus. In her journal she fictionalises her own experiences, and the experiences of others. McEwan indicates a certain level of egocentricity in this:

‘She had never lost the childhood pleasure in seeing pages covered in her own handwriting.’

Crucially too, McEwan is clear about the relationship between the narratives and the truth:

‘She liked to write out what she imagined to be their rambling thoughts. She was under no obligation to the truth’.

Through Briony’s literary musings on the nature of fiction, McEwan is retrospectively explaining the structure of the novel. Briony’s own shift in thinking reflects on Parts One and Two, though McEwan delays the full revelation. When she delivers her manuscript to Horizon, she reasons that:

‘The age of clear answers was over. So was the age of characters and plots… she no longer believed in characters. They were quaint devices that belonged to the nineteenth century.’

McEwan’s full strategy with Atonement becomes clear when Briony reads Cyril Connolly’s letter. This late narrative twist, inviting reconsideration of the entire novel, is in some ways reminiscent of the ‘Historical Notes’ at the end of Margaret Atwood’s The Handmaid’s Tale, although those occupy the very final pages of the book. Connolly’s letter is near the end, but not the final word, so it creates retrospective consideration of the early parts of the novel and the knowledge it imparts informs the last section, ‘London 1999’. Some readers feel the rug has been pulled from beneath them, but McEwan has laid the trail with references to writing, truth and artifice, with so many links to other literary works, that for other readers it is a satisfying confirmation of the direction of narrative travel.

These considerations run underneath the final section, revealing Briony’s dementia diagnosis, the worldly success of the Marshalls, the conversion of the Tallis’ house into Tilney’s Hotel and, at last, a performance of The Trials of Arabella. But McEwan has one trick left up his sleeve, which he does delay until the end, like Atwood. While a logical extension of the revelation of Briony as the author of Parts One and Two, it causes a stir nevertheless, accentuated by the almost offhand way in which Briony reveals that ‘Robbie died of septicaemia at Bray Dunes’ and that ‘Cecilia was killed in September of the same year by the bomb that destroyed Balham Underground station.’ McEwan rips away that fraught but romantic reunion in London. As noted earlier, ‘She was under no obligation to the truth’. Why do we read fiction? Again, Briony challenges realism. ‘Who would want to believe’, she asks, that the lovers never met again, ‘except in the service of the bleakest realism?’ Briony’s fantasy, her ‘atonement’ for her crime, is an entirely logical culmination of McEwan’s novel, though for some readers it is itself a crime against fiction.

Read this article from Longwood University for a fuller discussion of the links between Atonement and Jane Austen’s novels.

Beyond Repair: Ruins and Rubble in Ian McEwan’s Atonement

Read about other experiments with narrative form, including Jane Austen’s.