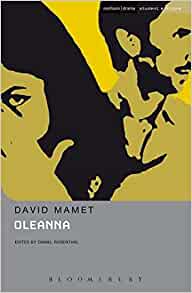 Often when we are discussing literary texts, we explore different critical responses to them and we also consider the context of their times. It’s often interesting too to bring these together and consider how different times response to texts in different ways. This has been illustrated by the responses to the recent revival of David Mamet’s play Oleanna, first performed in 1992. 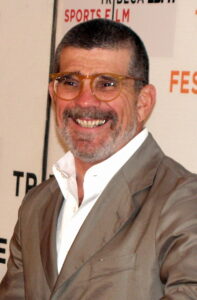 American playwright Mamet made his name in the 1980s with brutal satiric explorations of aspects of American life, from relationships to business dealings and materialism. His characters are often energetic and driven, frequently foul-mouthed . He won the Pulitzer Prize in 1984 for Glengarry Glen Ross, about four workers in a real state office and their ruthless, unethical drive to sell property for the highest price irrespective of suitability or value for the purchaser.

His two-hander Oleanna was first performed in Cambridge Massachusetts in 1992 before moving to New York. The first British production was directed at the Royal Court Theatre by none other than Harold Pinter. The play explores  the relationship between a college professor and a student, leading to accusations of sexual harassment. Reviewers saw it as a critique of political correctness, an act almost of resistance against the power of unfounded allegations. David Suchet and Lia Williams played the two roles in that production and it is worth revisiting a review of it here. (Although the review is dated 2015, it is of the first Royal Court production).

There was a strong feeling that Mamet was defending masculinity. He has become increasingly right wing, a supporter of Donald Trump and a critic of the NFL protests. It is often cited that after seeing Oleanna, couples would be seen in the theatre foyer afterwards ‘screaming at each other’. As seen here is this careful profile of Mamet, the play was characterised as one of ‘male triumphalism and female anger’.

Over the course of the last year or so, the theatre and film world in particular, the world which Mamet occupies, has been rocked by numerous claims of sexual harassment which have given impetus to the #MeToo movement. Our society is now much more aware of the realities of sexual harassment and this means a contemporary production of Oleanna takes place in a very different environment. Inevitably it will be read and performed in a different way, as this article points out.

It would seem inconceivable in 1993 that Mamet had written what could be considered as a play exploring masculine power structures and celebrating the empowerment of women. Finally, here’s a review of the current production.