We are a little bit late, but perhaps some of you noticed that 16 June was Bloomsday. Those who didn’t notice may wonder what Bloomsday is. It is the annual celebration of the Irish writer James Joyce. The date, in 1904, is the day when his great novel Ulysses is set, and is named after its hero, Leopold Bloom. The ideal way to spend Bloomsday is to follow the Bloom’s route around Dublin on the day, but if you cannot manage that, you can pick up and read one of Joyce’s books.

His A Portrait of the Artist as a Young Man begins:

It doesn’t sound like the opening of a novel about religious and sexual awakening, but the narrative voice of the novel develops with its protagonist, Stephen, so it is entirely appropriate for the opening sentences to be written in the vocabulary and structures of a young child. There are strong autobiographical elements to the novel and it reflects Joyce’s frustrations with the stifling conservatism of the religious Ireland in which he grew up.

That world is also the context for his short story collection Dubliners. It’s a varied, wonderful group of stories, with humour and pathos. For a taster, you can listen to Eveline, a moving story of constriction and missed opportunity, here. 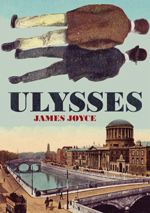 Ulysses, though, is Joyce’s magnum opus. There is an allusion, of course, to the Classical wandering hero, but Leopold Bloom is an ordinary man wandering around Dublin in a day. The allusion, however, informs the structure of the novel and it is highly experimental in form, one of the key examples of modernism. It is an important example of stream of consciousness narrative, and as well as those structural intertextual allusions, Joyce plays with language and makes liberal use of parody. It’s a fun book, though it does have its  challenges because it is so unconventional. It has also been  quite controversial, as you see in this article.

Ulysses was published in 1922, which makes this year its centenary, so people have been paying particular attention to it. Here is an article about the novel and Joyce by Edna O’Brien, and here’s another celebratory piece. Yet its controversies at one stage threatened to make it a banned novel, deemed inappropriate for people to read. This is an area I have discussed recently, so it’s not one that goes away – politicians, religions and those in power have often attempted to restrict what people can read. Here is a fascinating article from the USA which looks at the ramifications of the attempts to ban Ulysses a hundred years ago and the state of free speech and Twitter today.

If you want to research James Joyce, a key source is now the University of Reading, which has recently been the beneficiary of a collection of his papers.