‘On 1 February 1984, an Englishman with a rucksack and walking-boots strides into a bungalow in the Irene district of Pretoria. He is six feet tall, with fair hair swept over a huge forehead and staring blue eyes.’ This vibrant portrait begins Nicholas Shakespeare’s biography of Bruce Chatwin, journalist, travel writer and novelist.

I stumbled across a film on television last week, where film maker Werner Herzog explored Chatwin’s work and passions, the work they did together and the film maker’s fascination with the writer. Shakespeare is a frequent interviewee. You can see the documentary here.

Chatwin is a fascinating figure. Initially he did not go to university but started work as a porter at Sotheby’s auction house in London, from where he rose to be the resident expert on Antiquities and Impressionist Art, running both departments. The job honed both his eye for art and his writing, as he had to describe objects precisely and evocatively for catalogues. The research led to a fascination for the stories which objects from the past tell about the people who made them and used them.

It seemed that he was destined for the top job at Sotheby’s, but he left to travel. He had an inveterate wanderlust and was attracted by the idea of nomadism, wondering what compelled people to travel rather than stay put. Inspired by a piece of prehistoric skin which has been sent to his grandmother by her cousin in South America, and which had always been referred to in the family as a piece of brontosaurus skin, he set off for the southern tip of South America, the area known as Patagonia, where the skin had been found. 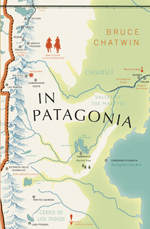 Of course it wasn’t brontosaurus at all, but a fragment of skin from the extinct giant sloth, but it took him across the world and resulted in his book In Patagonia, published in 1977. It reinvigorated the genre of travel writing and is experimental in structure. He aimed to highlight and retell the stories of people and places, though this led to some controversy, his veracity being questioned at times. Nicholas Shakespeare defends him, suggesting that Chatwin embellished the stories he discovered in a way which made them ‘more true’. That is paradoxical, but if the truth of a story depends in some way on its effect, on its gripping of the imagination, we can see what he means. Chatwin, tellingly, denied there was any difference between fiction and non-fiction writing. 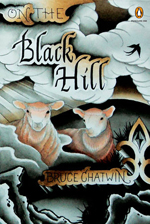 Fiction was his next publication. Having been writing about travel, he next turned ‘to write something about people who never went out.’ On the Black Hill is a moving, desperately sad novel about twin Welsh hill farmers, living a simple, hard existence with their sheep on the unforgiving Welsh hills, which Chatwin himself knew well and loved. The novel won the James Tait Black Memorial Prize and the Whitbread Prize for Best First Novel in 1982 and in 1988 it was adapted and directed as a film by Andrew Grieve. Read more about the novel here. 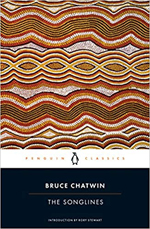 Chatwin’s fascination with ‘the nature of human restlessness’ drew him to Australia and produced perhaps his most famous book, The Songlines (1987), which explores the Aboriginal dreaming tracks, the songs which map both landscape and time, songs and stories which provide a geographical and a historical atlas for a people to place itself. Again it is experimental, opening in the form of a novel about a character called Bruce, but breaking down into notes and narratives. While being a bestseller, it attracted controversy as Chatwin relied mostly on interviews and researches among white Australians, as he was unfamiliar with Aboriginal languages, but he has also had some staunch defenders.

Chatwin’s final novel, Utz, was published in 1988 and draws on his Sotheby’s experience as if focuses on an art dealer obsessed with Meissen porcelain. It was shortlisted for the Booker Prize. Sadly, Chatwin died shortly afterwards, of AIDS, in January 1989.