Let’s start this week by writing about writing. When a writer as renowned as Michael Morpurgo says that being able to express yourself is more important than following the rules of spelling and grammar, it causes a stir and people fulminate about lowering standards. But of course if you read his article, he isn’t quite saying that at all, but arguing that a focus on rules at an early age, rather than expression, deadens children’s enthusiasm for writing. He points to academic research which shows that the ‘emphasis on grammar in primary school does not improve six- and seven-year-old children’s writing’. It is undoubtedly true that there is a good deal of snobbery about ‘proper’ spelling and grammar, as this article explores. As the author states, ‘It seems obvious to me, a relatively educated person, that judging a person’s “intelligence” … on their ability to spell a word correctly or construct a sentence with the correct verbs, nouns and clauses is deeply flawed.’

Of course many writers deliberately undermine the conventions of grammatical structure and spelling for particular effects. I quoted the opening of Joyce’s A Portrait of the Artist as a Young Man a couple of weeks ago, and famously Ulysses ends with a long, completely unpunctuated chapter. Peter Carey’s True History of the Kelly Gang, which won the Booker in 2001, is an entire novel written with little acknowledgement of conventional grammar or punctuation. Robert McCrum ranked it as one of (just) the 100 best novels. Many writers in English from around the world employ a version of the language which carries the inflexions, structure and lexis of their own country. The topic is discussed here as part of the post-colonial literature course.

However, in most circumstances, we write more conventionally, particularly if we are writing academically. As the University of Cumbria states:

Punctuation is very important because it helps readers to make sense of a piece of text – you don’t want your reader to have to re-read sections of your essay because they can’t figure out what you are trying to say. Remember, your reader is your tutor and if they don’t understand what you have written, they can’t give you any marks for it.

This has boosted the rise of services such as Grammarly, which now has over 10 million active users, being guided in their phrasing, spelling and punctuation. While such tools have their uses, they can also be immensely restrictive, as anyone who has Microsoft Word’s grammar check switched on will know. While there are grammar rules, there is also style, and there is even an art to the placing of a comma. 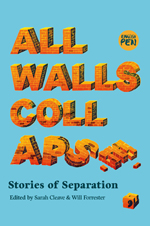 And now to the literature which is so artfully written. Over the last few years we have been starkly reminded of separation, border and frontiers, from Trump’s wall, UK immigration rhetoric, the fractious border between Israel and the Palestinian Authority and recently Russia’s invasion of Ukraine’s sovereign territory. With this in mind, I was struck by a review of a collection of short stories from around the work that explore such divisions and separations, All Walls Collapse. What is significant is that many of these seem to be stories of resilience and hope.

A range of stories is likely to include a range of narrative perspectives. I was struck by the words of Ruth Ozeki this week when she said in an interview that she is uncomfortable with the traditional omniscient third person narrator. ‘I grew up thinking it was the proper voice for the novel,’ she said, ‘but it’s also a monotheistic voice, the voice of God. I’m not a monotheistic believer and I’ve never felt the authority to speak from a single point of view.’

It’s an interesting view of the all-controlling, all-knowing narrative perspective and perhaps accounts for why the omniscient narrator has become less common in 20th and 21st century fiction. We are now much more accustomed to fractured poly-narratives through which we have to find our way as readers. Ozeki also commented on the interpretive work a reader has to do, bringing themselves to the text:

…for a novel to work it requires the reader to do half the imaginative work. Without that the novel simply won’t mean anything. Every reader of my novel seems to have read a very different book to the one I’ve written. And that’s great.

You can read the full interview here.