“There’s a point in your life when you quit expecting wonderful and delightful things to happen to you, and I passed that point a long time ago.”

So said American writer Annie Proulx, but she has given us some wonderful and delightful writing.

A recent list of films apparently voted by viewers as the most boring included Brokeback Mountain at no. 4, which is something as a surprise, as it has been ranked as a great film, ground-breaking, with stellar performances by Heath Ledger and Jake Gyllenhaal. Its challenge to the great American cowboy masculine myth has been shocking to some. The film, of course, could not have been made without Annie Proulx’s original short story, first published in the New Yorker. You can read the story on their website still. It was a prize-winning story and appeared in a volume of her Wyoming Stories, focusing on rural America. As well as a film, it has also been adapted as an opera, though without the same acclaim. 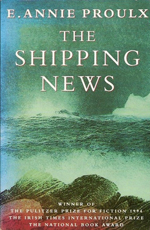 That story was published in 1998, but Proulx first came to international attention in a big way with her Pulitzer Prize-winning novel The Shipping News in 1994. It is a novel of redemption, the central character rebuilding their life as a hack newspaper writer in Newfoundland, writing, you guessed it, the shipping news. It is warmed by humour and is written in a sparse truncated style, creating a sense of place. It was a popular prizewinner and immediately put Proulx on the best-seller lists. Read a review here. 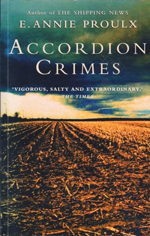 That novel was followed by Accordion Crimes, where the accordion is an immigrant to the United States from Sicily in the nineteenth century, along with its maker. Following his murder, the instrument makes its way across America, exploring the continent with different owners, sometimes with their crimes, and with their deaths. In doing so, Proulx covers a sweep of American history and the range of immigrants who have arrived there, settled and made America their home.

I’ll end this quick survey of Annie Proulx by recommending a quirky and very funny short story. The Contest is set in the bizarrely named village of Elk Tooth, where the local competition to grow the longest beard is disturbed by the arrival of a stranger on a motorbike.

Proulx’s other writing? Quite a surprise, with books on gardening, fences and cider making. You could try those, too.

While people love a good list, those lists seldom have real relevance, but here’s one with a difference. As in Britain we move towards the celebration of Queen Elizabeth’s platinum jubilee, there has been a consideration of the most important books published in the different decades of her reign. Ten books each from seven decades gives quite a spread of literature. It is a fascinating, international list which highlights key trends, events and ideas from the 1950s to the present day. There’s Sam Selvon’s Windrush immigrant novel Lonely Londoners, Burgess’ controversial The Clockwork Orange, the magical realism of Rushdie’s Midnight’s Children, the powerful and necessary Margaret Atwood’s The Handmaid’s Tale, Roy’s fascinating, moving novel The God of Small Things, Adichie’s shocking novel of the Nigerian civil war Half of a Yellow Sun, and Galgut’s political post-apartheid novel The Promise. That is just one from each decade. It’s a great list, including many terrific texts, so it serves as a brilliant reading list of some of the best fiction of the last seventy years. Get started!