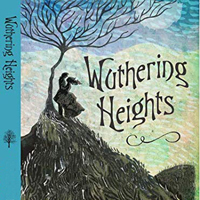 Emily Brontë’s Wuthering Heights is an extraordinary novel. Published when its author was 29 years old, it has become the classic Romantic gothic novel, a tale of cruelty, death and love on the bleak Yorkshire moors. Brontë died in the year following the novel’s publication. Emily was a shy woman – her sister Charlotte wrote that she was ‘not naturally gregarious’ and that she had a ‘tendency to seclusion’. Yet the novel is an extraordinary account of raw passion and violence. The novel is also radical in its structure. The narrative shifts backwards and forwards in time and is told in the voices of different narrators, leaving the reader to piece things together and judge the reliability of those narrators. The novel is another example showing that there’s little new in experimentations in narrative form.

Emma Rice is quite an experimental theatre director, making her name with Kneehigh Theatre Company. She was appointed Artistic Director of Shakespeare’s Globe in 2016 and radically shifted its tone, bringing her energetic style of production to the mock-Elizabethan theatre. Audiences loved her work, a vibrant production of A Midsummer Night’s Dream being a highlight. You can read about what she views as her ten brightest Globe moments here. Her work was too radical for the Globe’s board who had appointed her, though, and she left in 2018. She has just made her mark again with an unusual adaptation of Wuthering Heights. It’s not at all what you might expect. This review suggests it could be seen as ‘a comedy or pastiche of Emily Brontë’s brooding novel – or even a folk musical’. However, the show is nevertheless ‘bold and ingenious’. It’s on at Bristol Old Vic, but everyone has a chance to see it, as the production is touring and will be streamed. Here are the dates: