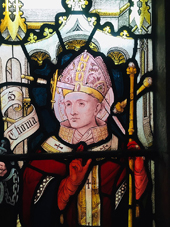 Anyone studying Chaucer will know The Canterbury Tales, a construction of a number of stories told by a group of pilgrims on their route from London to Canterbury. Canterbury has been an important Christian site since the cathedral was first founded in 597, rising to greater prominence when it was rebuilt in the late 11th century. It became a key site of Christian pilgrimage in the late 12th century following the murder of the archbishop, Thomas Becket, by four knights who were acting on behalf of King Henry II, on 29 December 1170.

While the famous words from Henry, ‘Who will rid me of this troublesome priest?’ are most likely apocryphal, tensions had been growing for a long time between the archbishop and his king, as Thomas steadfastly defended the rights and privileges of the church, including the restriction of the jurisdiction of the secular courts over clergymen. A contemporary account of his assassination runs as follows:

…the impious knight… suddenly set upon him and [shaved] off the summit of his crown which the sacred chrism consecrated to God… Then, with another blow received on the head, he remained firm. But with the third the stricken martyr bent his knees and elbows, offering himself as a living sacrifice, saying in a low voice, “For the name of Jesus and the protection of the church I am ready to embrace death.” But the third knight inflicted a grave wound on the fallen one; with this blow… his crown, which was large, separated from his head so that the blood turned white from the brain yet no less did the brain turn red from the blood; it purpled the appearance of the church… The fifth – not a knight but a cleric who had entered with the knights… placed his foot on the neck of the holy priest and precious martyr and (it is horrible to say) scattered the brains with the blood across the floor, exclaiming to the rest, “We can leave this place, knights, he will not get up again.

Thomas Becket’s murder not only had an enormous effect on England, but across Europe. The British Museum has just launched a major exhibition about this murder that shook the Middle Ages. Now that restrictions are being eased, there is a great opportunity to visit the museum and explore the source of the shrine for Chaucer’s pilgrims.

Here’s the British Museum’s exhibition page and here is the Museum’s blog about the exhibition.

A five-star review of the exhibition can be read here.

And if you fancy watching an old film of the story, starring Peter O’Toole and Richard Burton, it’s here: