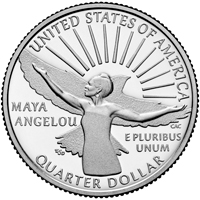 Times, they are a-changin’, sang Bob Dylan. He’s not just a singer, remember, but the winner of the Nobel Prize for Literature in 2016. And the times certainly are – I would never have thought that I would be writing about Barbie dolls, for example. However, it is significant that a Barbie doll was released last year to commemorate a great American writer. That writer is Maya Angelou, who died in 2014. She is best known for her autobiographical novel, I Know Why the Caged Bird Sings, and for her poetry volume And Still I Rise. Both books are ultimately triumphant, celebrating the resilience and ‘sassiness’ of the female, black American spirit. More recently, Maya Angelou has become the first black woman to be featured on a US quarter dollar, with the wings of her freed, formerly caged, bird behind her. There’s a complementary article about the honour here. Oh, yes, Bob Dylan, the old road is rapidly ageing.

You may write me down in history
With your bitter, twisted lies,
You may trod me in the very dirt
But still, like dust, I’ll rise.

Does my sassiness upset you?
Why are you beset with gloom?
’Cause I walk like I’ve got oil wells
Pumping in my living room.

Did you want to see me broken?
Bowed head and lowered eyes?
Shoulders falling down like teardrops,
Weakened by my soulful cries?

Does my haughtiness offend you?
Don’t you take it awful hard
’Cause I laugh like I’ve got gold mines
Diggin’ in my own backyard.

Does my sexiness upset you?
Does it come as a surprise
That I dance like I’ve got diamonds
At the meeting of my thighs?

Out of the huts of history’s shame
I rise
Up from a past that’s rooted in pain
I rise
I’m a black ocean, leaping and wide,
Welling and swelling I bear in the tide.

Leaving behind nights of terror and fear
I rise
Into a daybreak that’s wondrously clear
I rise
Bringing the gifts that my ancestors gave,
I am the dream and the hope of the slave.
I rise
I rise
I rise.

Angelou’s verse has a rhythm and music which emerges naturally out of her colloquial language. In that sense she shares something with Shakespeare and other playwrights of the Elizabethan and Jacobean periods. Of course Shakespeare can be highly formal at times, but the fact that so many of our everyday phrases have their roots in Shakespeare’s plays demonstrates how natural his language is. Ben Jonson, in plays like The Alchemist and Bartholomew Fair, was famous for creating dialogue out of London street-talk, or cant, with its own particular lexicon and phrasing. Now a young person’s theatre group is exploring Shakespeare to get the plays back to what Angelou would call the ‘sassiness’ of their language and expression. Romeo and Juliet is a play about a turf war between teenage gangs, after all, so deftly grasped in Bernstein’s musical version, West Side Story, so brilliantly reshot recently by Steven Spielberg. Intermission Theatre is supported by none other than Mark Rylance, former artistic director of the Globe. Read about the project here and visit Intermission’s website. There is also a Youtube channel. Shakespeare returns to the street.